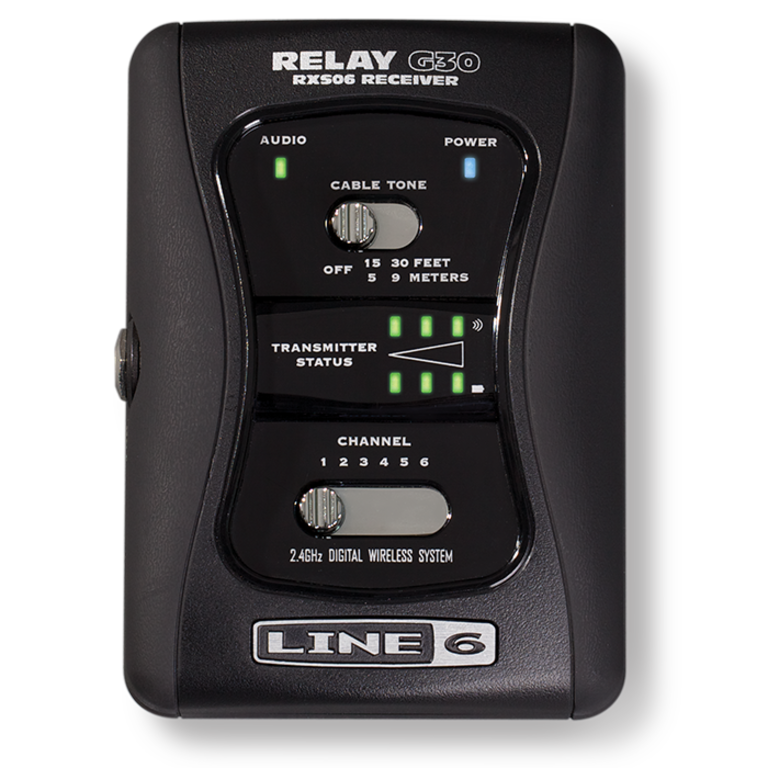 The Relay G30 instrument wireless system is compact and lightweight, while at the same time its rugged polycarbonate shell makes it dependably roadworthy. Refreshingly easy to use, the Relay G30 offers reliable performance whether the receiver is placed on your amp top or mounted to your pedalboard.

No signal squashing or annoying hiss

Analog wireless systems use the FM radio band to transmit to the receiver, which requires that the audio be compressed to avoid bumping into the channels on either side of the one you’re transmitting on. Compression reduces gain above a certain level, which has the effect of flattening out the audio. In other words, the sine waves become squared off. Noise is also introduced from the FM process, further compromising the signal-to-noise ratio. This noise increases as the transmitter gets further from the receiver, causing noticeable hiss. Line 6 digital wireless systems don't use compressors or expanders and the signal is binary—so it’s not affected by noise.

Your tone, exactly as you intend it to be heard

Relay guitar wireless systems deliver 24-bit digital wireless sound quality and full 10Hz-20kHz frequency response, so you’ll hear your guitar tone in amazing detail. And with a wide dynamic range you’ll hear the full frequency range of your guitar or bass tones—from the highest of highs to the lowest of lows.

Signal interference is a thing of the past

The last thing you want to hear when you’re performing is the nightly news coming through your amp. Unlike traditional analog wireless systems, Relay systems operate in the 2.4GHz ISM band, so there’s no danger of TV broadcasts, white space devices, or other sources interfering with your audio signal. Plus, encoded DCL™ (Digital Channel Lock) technology distinguishes Relay audio from other competing signals—such as Wi-Fi, laptops, smart phones and tablets—ensuring the integrity of your signal.