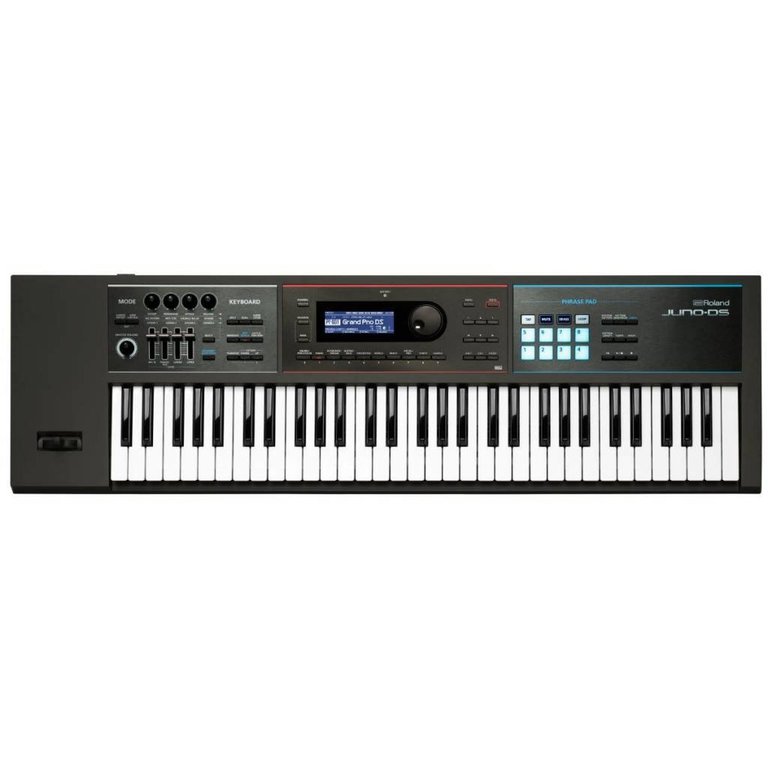 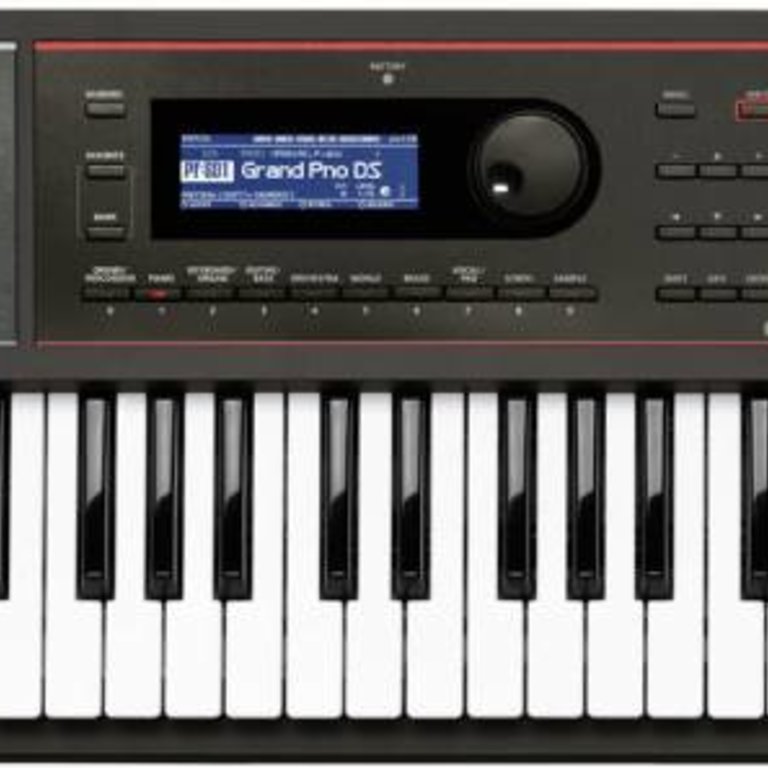 $799.99
Roland
In stock
Session. Studio. Showtime. Wherever your music takes you, the ultra-portable JUNO-DS is with you every step of the way.
Share this product:

Any place. Any time. JUNO-DS is the new generation of ultra-portable synth for musicians who are going places. The lightweight cabinet and streamlined operation means JUNO-DS synths are simple to load in and set up, letting you focus on the show or session. Plus, they offer flexible features for every band scenario, including a choice of pro-quality built-in sounds, onboard pads for audio playback, and a pattern sequencer for creating original songs. Choose among the 61-note JUNO-DS61 and 76-note JUNO-DS76 models, which feature velocity-sensitive keyboards with synth action, and the JUNO-DS88, which comes equipped with an 88-note keyboard with weighted action.

Life moves fast as an upcoming musician or ambitious new band. When you’re racing between rehearsals, sessions and shows, you don’t have time to spend with a bulky, complex synth that’s difficult to use. The Roland JUNO-DS61 is the ultra-portable modern synth that can keep up with your band life. Lightweight, compact and powerful, this 61-note instrument is always ready to go, with easy operation and instant access to pro onboard sounds that let you create or perform music anywhere from street to studio. The JUNO-DS61 is the easiest way to start playing a keyboard with the band, with the flexibility to continue supporting you as your music progresses.

If you want your band to get noticed, you need to get out there. Whatever you’ve got in the diary, the JUNO-DS61’s compact size and 5.3kg weight means it’s easy to transport, load in and set up, so you’ll never have to turn down a career-making gig across town, miss a vital band rehearsal or arrive late to a recording session. With optional battery operation for street performance, and a mic input that lets you create pro vocals without external gear, the JUNO-DS61 is ready for every scenario the music industry can throw at you.

It’s frustrating when the band adds a new song to the set and you can’t find the right sound in your synth. The JUNO-DS61 has the pro onboard sounds to keep you covered, whatever genre comes up next. Instantly choose your favorite pro-quality sounds from nine categories, and with over 1,000 sounds including acoustic and electric pianos, organs, and synth, there’s enough choice to cover any musical genre or performance style. And the patches from the previous-generation JUNO-Di synth are fully compatible too. Just think of a sound – and it’s right there at your fingertips.

Some synths make you stick with the factory settings, which can leave your music sounding a little generic – but the JUNO-DS61 is wide open. The instant-access design lets you call up pro sounds in seconds. But even if this is your first synth, it’s simple to dig into an array of adjustable parameters and create your own voice. Select the performance mode and you can set up advanced sounds like layering strings onto the acoustic piano, or assigning organ and bass to your right and left hands respectively. Create and tweak patches. Shape sounds during a song with hands-on controls. Connect expression pedals via the rear panel to take your performance to the next level.

As your band gets adventurous and your playing evolves, it’s vital to play a synth that won’t get left behind. The JUNO-DS61’s onboard sounds and editing capabilities are just the beginning. This modern instrument also supports internal waveform expansion via USB, bringing the best synth sounds from the web into your performance. It’s easy to get started, with the versatile EXP-06 Studio Collection preloaded in the wave expansion slot. Then choose your favorites from over 1000 EXP patches available for free download at Roland’s Axial website. You’ll find top-quality acoustic piano collections, world instruments, go-to studio standards, percussion, loops – and it’s even possible to load in WAV files from your own sound library and play them from the keyboard. And the free JUNO-DS librarian software lets you manage all these sound patches using your computer.

Just because your bandmates aren’t available to rehearse, that doesn’t stop you honing your skills with a jam session. Using the JUNO-DS61’s eight Phrase Pads, you can add instant beats under your keyboard parts, or copy audio data (MP3/WAV) to the USB memory and play along with full-band backing. When your shows need more dynamics, the Phrase Pads also function as a live sampler: load them up with anything from sound effects to loops – then trigger them with a quick touch during the gig.

Eight-track pattern sequencer takes you from spark to finished song

When songwriting inspiration strikes, you need to catch it fast – and complicated gear can kill the moment. The JUNO-DS61 is the songwriter’s best friend. When you have an idea for a song or beat, you can easily capture and develop it with the onboard pattern sequencer. The intuitive, non-stop operation won’t interrupt your creative flow, letting you build up full arrangements with multiple sounds in a flash. It’s a great tool for live work, too, letting you enhance performances with pre-made backing music and on-the-fly looping.

Stand out from the crowd with unique vocal effects

If you’re a solo performer or singer/songwriter, you’ll love the JUNO-DS61’s mic input, which lets you get great vocal sounds without having to carry around extra gear. There’s a dedicated vocal reverb, plus Auto Pitch for singing with the “stepped” electronic vocal effect popular in today’s music. The built-in vocoder is inspirational too, allowing you to sing into a mic and control the tone and pitch via sounds played on the keyboard.

As a modern musician, you’ll do most of your recording on a home computer using a DAW – and the JUNO-DS61 has everything you need, no extra gear required. The integrated USB interface provides a solid front end for a mobile or studio recording setup, allowing you to record MIDI and audio data, including sounds from the mic input. There’s even a dedicated DAW Control mode for controlling your music software from the JUNO-DS61’s front panel. It’s never been simpler to get your songs done and dusted.